ASL is currently working in association with Exmouth Mussels in an effort to reinstate a traditional fishery for native oysters in the River Exe using modern aquaculture techniques.  A brief overview of the culture operations being developed is given as follows.

Species: The species being cultivated within the APB is the native European Flat oyster (Ostrea edulis). This species is the subject of a UK Species Biodiversity Action Plan, the Native Oyster Species Action Plan (NOSAP). The native oyster was the subject of a prolific fishery in the River Exe during the 19th Century until by 1863 overfishing exhausted the stocks. It was hoped even in the mid-1860s “that with scientific culture, the spawn might be preserved, and that the river Exe might easily become a nursery for oysters” (Source: The Devonshire Association, 1864). This project seeks to restore this traditional species to the River Exe using an innovative shellfish culture system.  It is also hoped that this approach will provide a broodstock of oysters that will encourage further natural settlement of this once abundant species in the Exe. 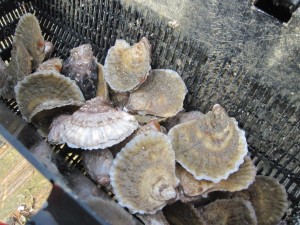 Site description and permissions: The native oyster cultivation site is located in the inter-tidal area of the west bank of the River Exe between a northern-most point of Lat. 50o38’42.38”N / Long. 3o27’7.86”W and a southern-most point of Lat. 50o37’59.96”N / Long. 3o26’54.02”W. This site has been selected because of its previous use as an area for trestle-based culture of the Pacific oyster (Crassostrea gigas); its previous high quality in terms of water Classifications for Pacific oysters and the relatively low level of recreational use.

ASL has completed an aquaculture restoration project on behalf of the Mumbles Oyster Company.

The aims of the project were similar to that of the SW England project in combining commercial activities with the provision of broodstock to help restore natural native oyster beds.